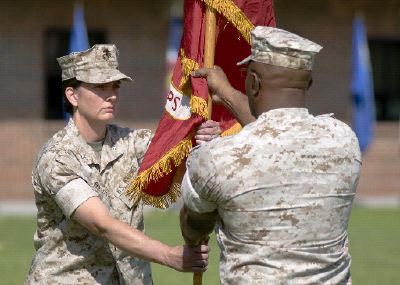 Redefining Gender Roles in Combat: Colonel Lori Reynolds, 45, the commanding officer of Camp Leatherneck, said that women did not belong in the infantry. “I don’t think they should close with and destroy the enemy. When you go out and see what the infantry does – the way they live, the way they train – it’s good that it’s all male.”

Tanning salons feel burned by 10 percent ‘tan tax’: “It’s almost like when your parents tell you that you shouldn’t drink and you sort of know it’s true, but you do it anyway,” said a laughing 29-year-old Marine officer who declined to give her name because she felt sheepish about divulging her tanning habits to those under her command.

Leading from the front and into the future: More than 20 Quantico women Marines shuttled up to the 23rd Annual Women’s Leadership Symposium in Washington, D.C. to discuss various topics including global force for good, ethics and the quarter-life crisis.

Looking for our fellow Marines: The Women Marines Association is the only veterans association for and about women Marines. We have gone from “Free a Man to Fight“ to being with our fellow Marines in every clime…we as women are also losing a very important part of our history on how we became Marines the more integrated we become. Active duty Marines can attend the 26th Biennial WMA Convention TAD.

Counter-insurgency down for the count: It’s only in the past year or two that the Marines Corps started pulling a few women off their full-time non-combat jobs and sending them out as FETs to meet and greet village women. As with so many innovative new plans in our counter-insurgency war, this one was cobbled together in a thoughtless way that risked lives and almost guaranteed failure. 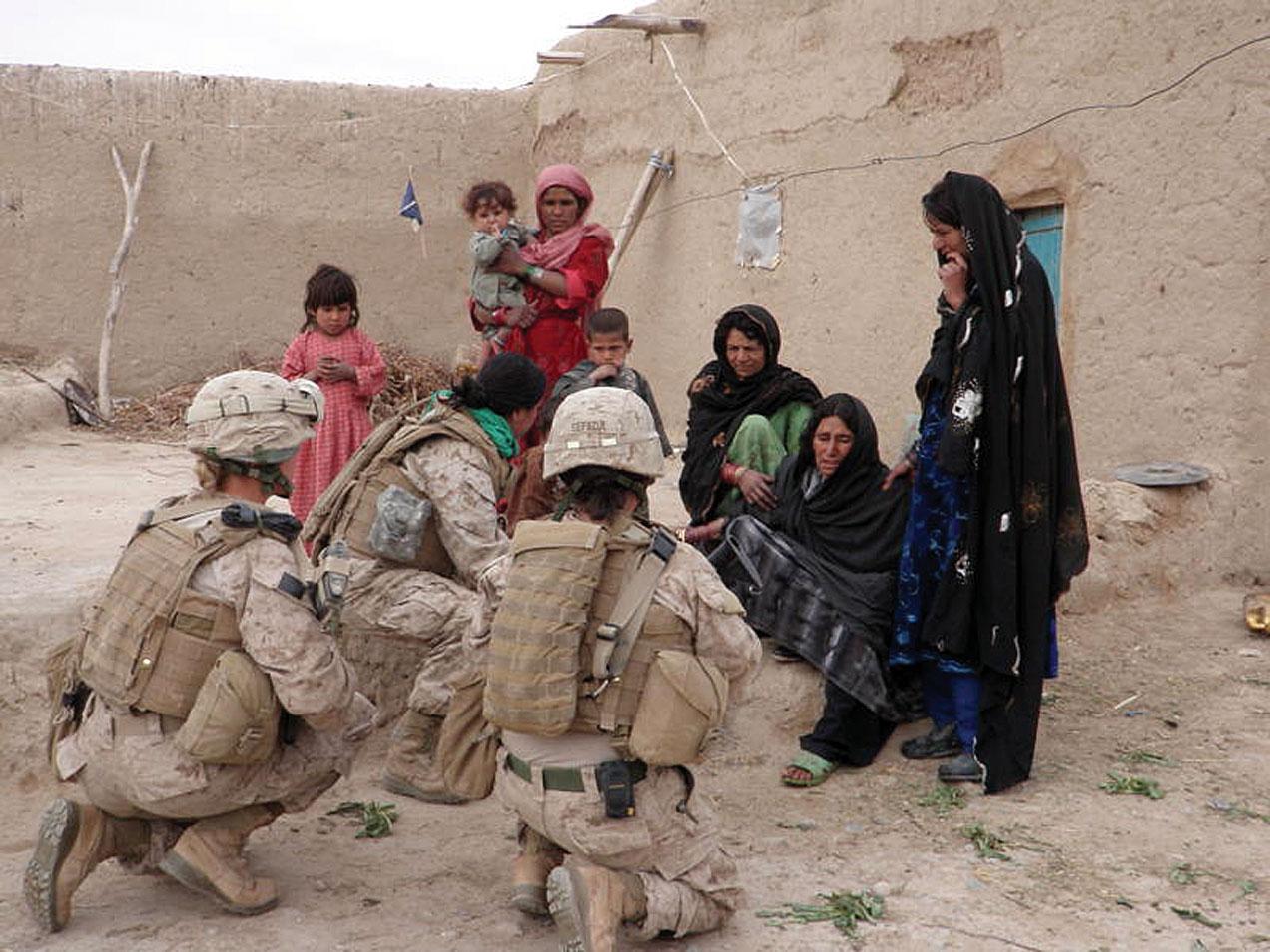 Missouri woman an example of new type of warrior: If you met Amanda Bass on the street, she likely wouldn’t stand out as a new type of warrior – but she was among the first female Marines to volunteer for a mission in Afghanistan that has come to be known by the acronym of “FET,” for female engagement teams. 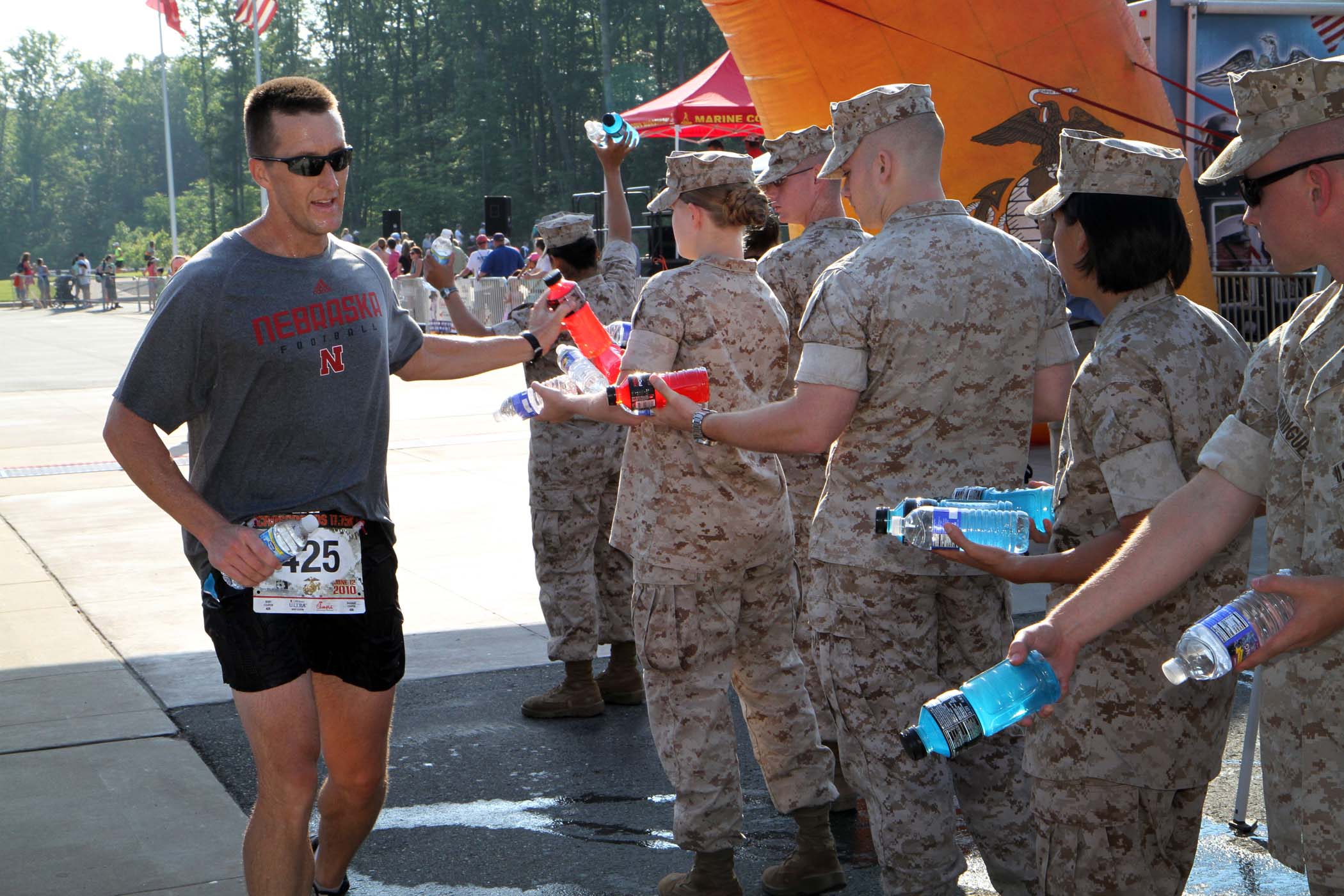 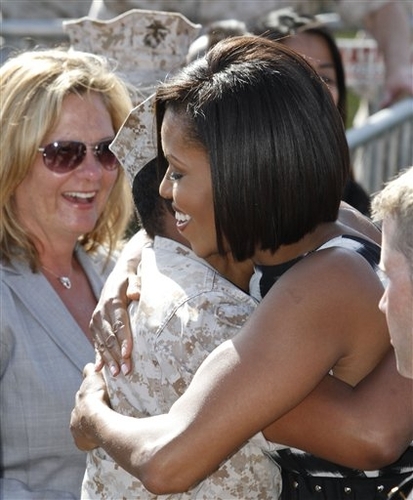 First Lady Michelle Obama gives a hug to a female Marine after a speech at Camp Pendleton Marine Corps Base in San Diego, Sunday, June 13, 2010. Article. 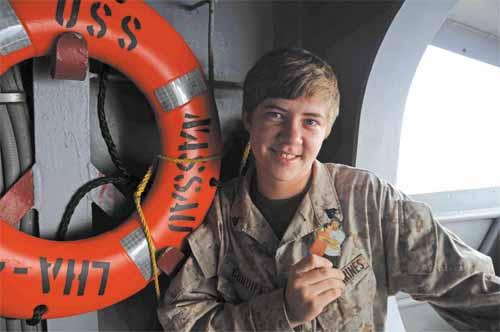 Marine Cpl Amanda Cundiff of the 24th MEU on USS Nassau, holds a picture of her mother, Logistics Specialist 1st Class Penny Drouse. Drouse is currently aboard USS Dwight D. Eisenhower, which is at sea in the same region as her daughter’s ship. Photo by Mass Communications Specialist 3rd Class Desiree Green. Article. 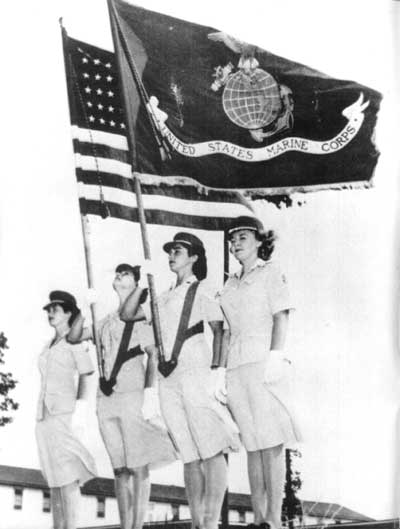 On 12 October 1942 when the Commandant was asked, “General Holcomb, what do you think about having women in the Marine Corps?” Before he could reply, the painting of Archibald Henderson fell off the wall. Article: Free a Marine to Fight. 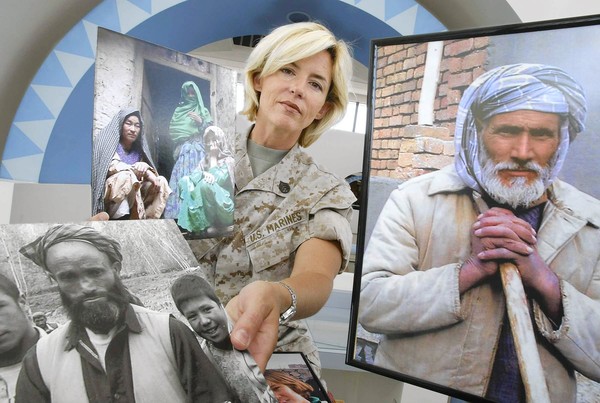 Marine Corps combat correspondent SSgt Amy Forsythe with photographs she made in northern Afghanistan. She currently has an exhibit at the Oceanside Public Library.
Photo by Don Bartletti, Los Angeles Times. Article. 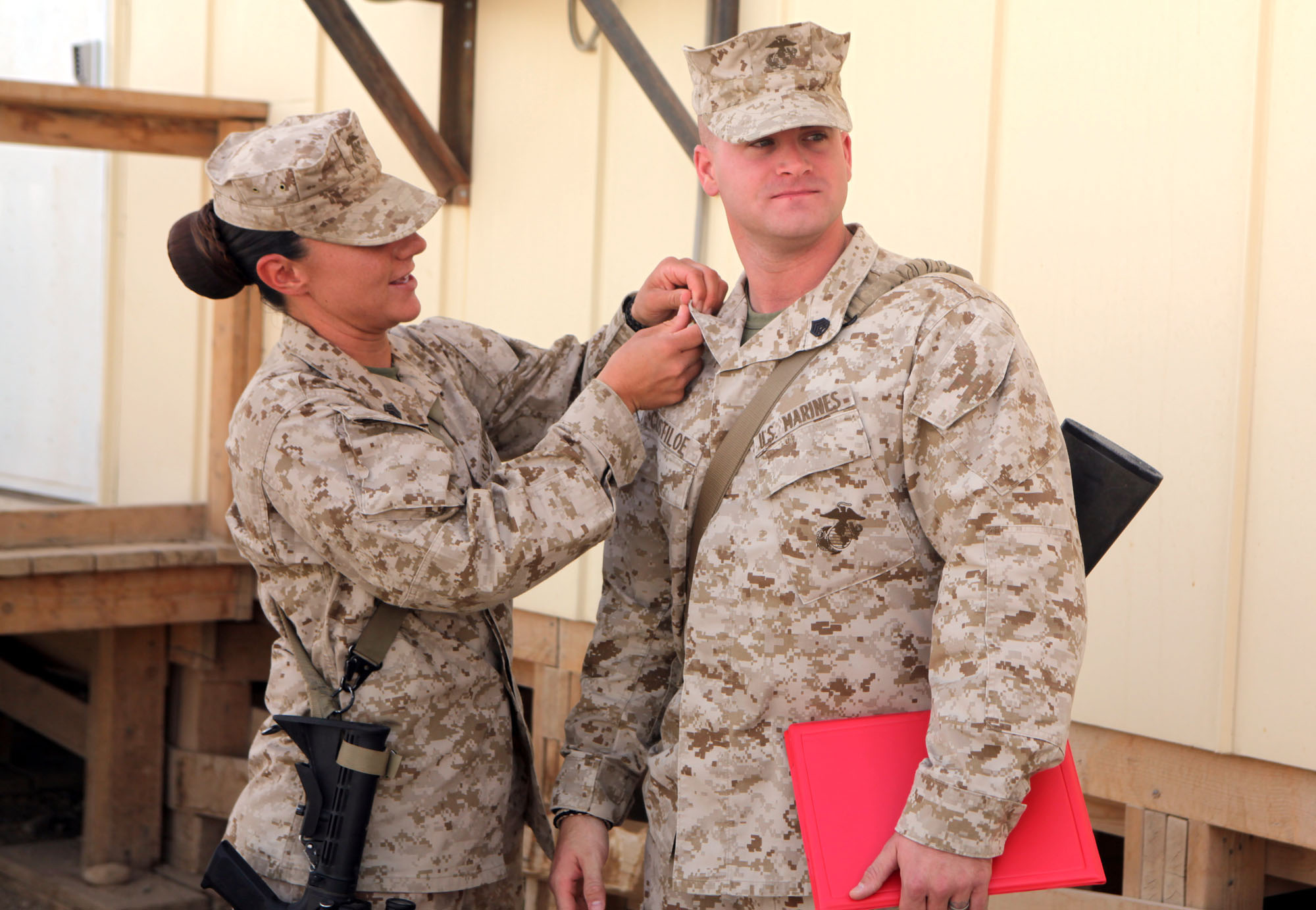 Sgt Jennifer Estrada, assigned to the female engagement team, 3rd Battalion, 7th Marine Regiment, adjusts the chevron ranks on her husband, SSgt Jonadam Costilloe, currently assigned as the I MEF air liason. Costilloe reunited with his wife of five months for his promotion ceremony held July 1. The Colorado couple are on their third combat deployment, their first on seperate camps. Photo by Sgt Heidi Agostini. Article. 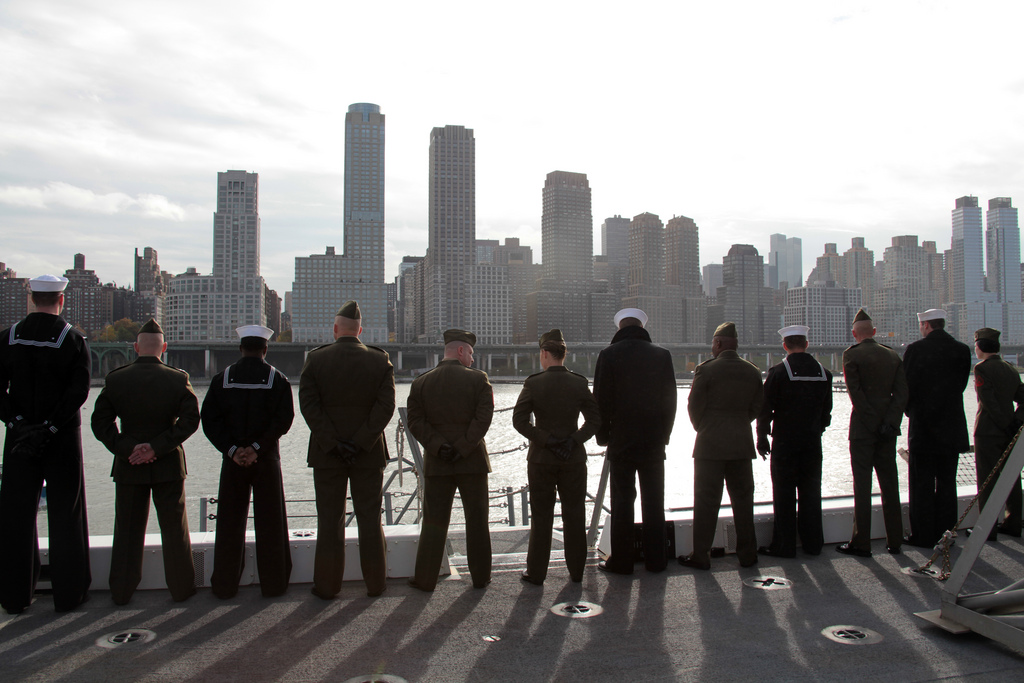 NEW YORK – Hundreds of Marines from Special Purpose Marine Air Ground Task Force 26 and sailors from USS New York man the rails as USS New York pulls into New York City Nov. 2. The ship, which has 7.5 tons of steel salvaged from the World Trade Center forged in its hull, was commissioned Nov. 7. 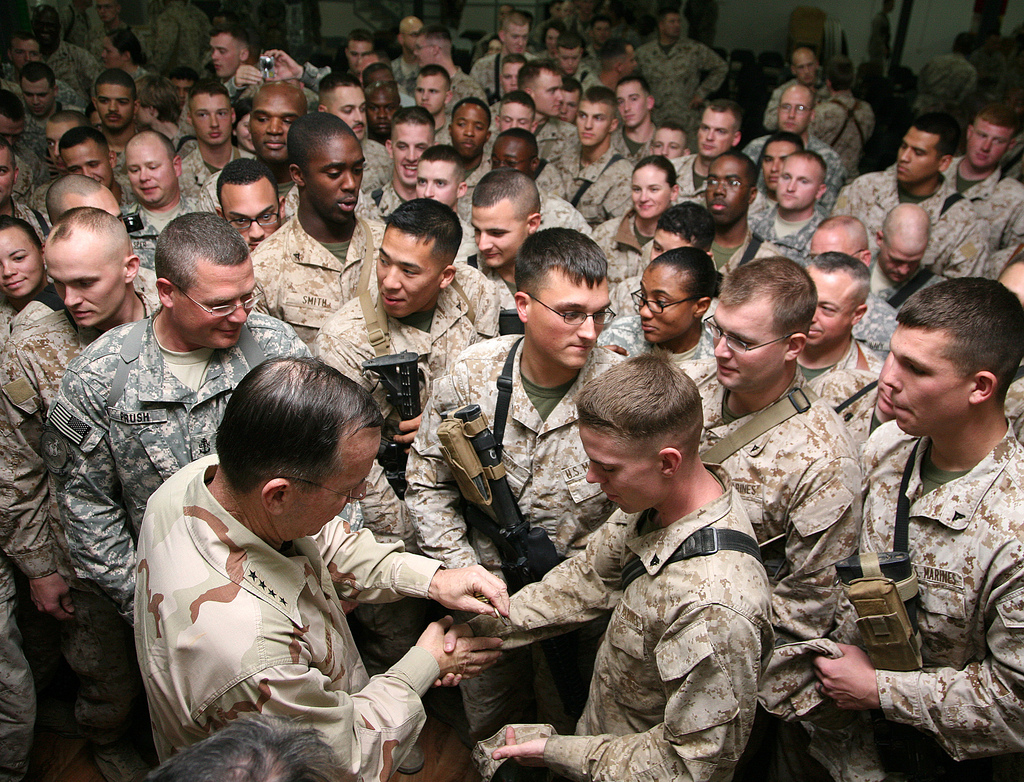 Adm. Mike Mullen, the chairman of the Joint Chiefs of Staff, hands out coins to service members at a town hall meeting aboard Al Asad Air Base, Iraq, Dec. 19. During the town hall, Mullen discussed change, leadership and the future of the U.S. armed forces. 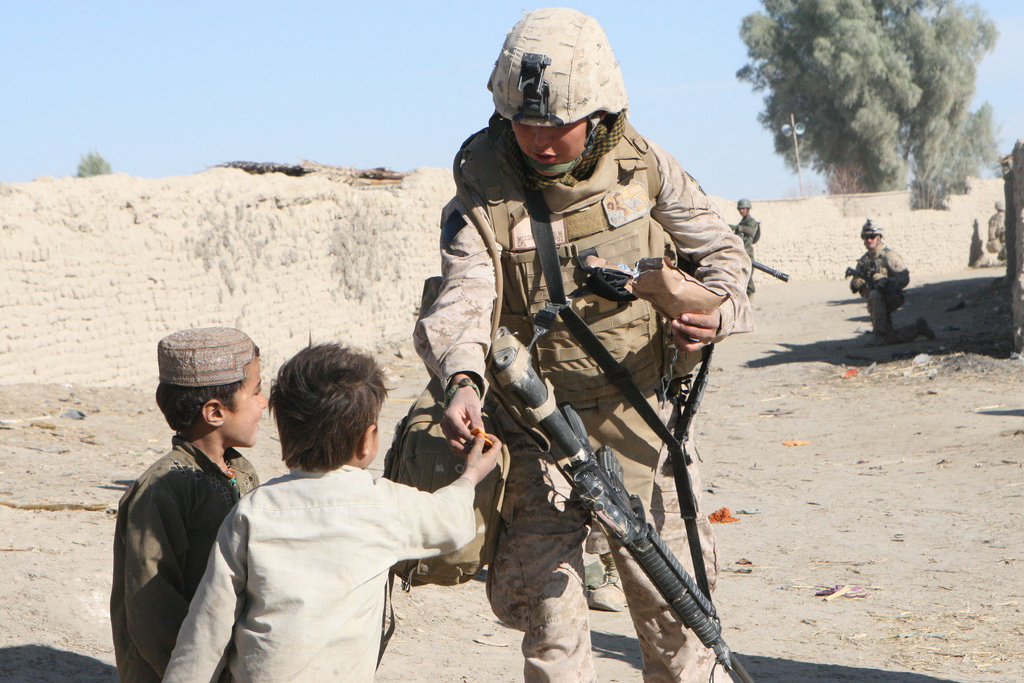 Cpl Sadie McCombs, a Marine with the female engagement team, 2nd Battalion, 2nd Marine Regiment, hands food to Afghan children during a patrol through the village of Tajik Khar in Garmsir, Afghanistan, Dec. 18. With Easy Company, 2/2, and local Afghan National Army providing security, the FET moved from compound to compound, hoping to speak to the females to discuss what medical care and humanitarian assistance was needed for them.

One thought on “Female Marines in the Media – 62”